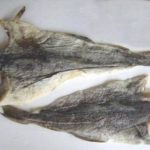 Salt Cod… an important staple in many tropical countries because of its storage properties, has been salt-cured and dried, until all of the moisture in the fish has been extracted. It’s used to make the popular French dish Brandade.

Market Description: Today, most of the salt fish consumed in the region is still imported, though countries like Guyana now makes its own salt fish. In addition to the ever popular cod fish, pollock, snapper and shark are also salt cured and dried. Salt fish is primarily made with meaty white fish.

Buying Tips: Salt fish comes in two varieties: bone-in with the skin in tack and boneless with the skin removed. The bone-in variety costs less than the boneless, skinless salt fish. Both varieties taste the same. The difference lies in the amount of work that goes into the preparation – removing the bones and the skin. However, once the bone-in salt fish is given a good overnight soak in boiling hot water, removing the bones and skin is very easy work.

Salt fish for household use is not packaged and sold in large quantities. It is mostly sold in half and one-pound packages.

Recommended Preparation: In order to prepare baccala for cooking, it needs to be re-hydrated and most of the salt removed. This is achieved through a process of overnight soaking in hot water and boiling. To avoid ending up with a bland piece of fish, the aim is never to remove all of the salt; enough salt should remain to taste.