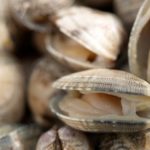 The term clam is generally applied to a wide variety of bivalve (two-shelled) mollusks. There are two main types of clam: hard-shell (Mercenaria mercenaria, from the Latin merces meaning “pay”) and soft-shell (Mya arenaria). Hard-shell clams generally live in deeper waters, whereas the soft-shell resides in tide flats. Soft-shells are generally not eaten raw.

There are two commercially important species of hard shell clams harvested in Florida, the southern quahog (Mercenaria campechiensis) and the northern quahog (Mercenaria mercenaria). These brown nearly- oval shaped mollusks come in three sizes. The smallest are Littleneck clams, which are the tenderest and sweetest and have a shell diameter of less than 2 inches. The largest is the Chowder clam, which has a shell diameter of at least 3 inches.

The hard shell protects the creamy beige, slightly salty meat inside. The rings or ridges on the outside of the shell indicate the clams growth and age, which can be more than 30 years. The most common East coast soft shell is the Steamer clam, which has an off white thin brittle, shell that doesn’t close entirely due to the long siphon extending from the body. They can reach sizes of 6 inches but are usually found at half that size.

• Quahog Clam (also Quahaug): Its name is derived from the Narraganset Indian word poquauhock, found in English texts as far back as 1753. Also known as the round clam, this is an East coast favorite. Generally recommended for eating raw and in chowders, depending on the size. Quahogs are hermaphrodites, meaning they are born of the male sex and change to female as they mature, remaining female for the rest of their lives. Smaller clams are best for eating raw. Quahogs also include Littlenecks and Cherrystones, which are simply smaller in size.

• Littleneck Clam: Small quahogs less than 2-3/4 inches are so named for Littleneck Bay on Long Island, New York. Generally recommended for eating raw and in chowders.

• Cherrystone Clam: Up to 3 inches, these are named for Cherrystone Creek, Virginia and take up to four years to reach their size. Generally recommended for eating raw and cooking. This is usually what you get when ordering clams on the half-shell.

• Butter Clams: From the Puget Sound area, these are small, sweet clams usually eaten raw. They are also known as moneyshells, as the Native American Indians used the shells for money.

• Longneck Clam: It is found in colder waters of the northern seas from the Arctic Ocean to Cape Hatteras and Pacific waters north of San Francisco. They are usually less expensive than other types and easiest to dig for. Generally recommended for steaming, frying, and chowder.

• Manila Clam: Imported from the Orient after 1900, this variety (Venerupis japonica) of littleneck is now a dominant species in the Northwest. Generally recommended to be eaten cooked.

• Razor Clam: Named for its sharp shell and its resemblance to a straight-edge razor, the East coast variety of this clam (Ensis directus) is not as easy to catch as its West coast counterpart, and thus not as popular. However, the unrelated Pacific razor clam (Siligua patula) is quite popular on the West Coast and is considered to have superior flavor.

• Geoduck Clam: (pronounced “gooey-duck”)… Related to the giant clam, this odd-looking variety (Panopea generosa) grows over eight inches in length and can weigh in at over five pounds, although most are harvested at less than three pounds. They are prized for the neck and the rest of the body is usually discarded.

• Steamer Clams: The soft-shell clam has shells that are very thin compared to those of a hard clam. Soft-shell clams are usually harvested at between 2 to 3 inches in length. They are sold live in the shell or shucked. This is a wonderful clam and can be consumed in a variety of ways.

• Cockles: This is a popular type of shellfish in both Eastern and Western cooking. Several species of cockles are considered to be good, edible clams. The rock cockle, is among the best known and most widely used for food. They usually do not exceed 3 inches in length.

Availability: Hard clams are caught wild from the Gulf of St. Lawrence to Florida, Texas, Cuba and Mexico. They are also harvested in five East and West Coast counties in Florida where they are farm raised. A few years ago, there were only about 70 clam farmers in Florida. Now there are over 450. Live clams should only be taken from “approved” coastal waters. Clams are available year round, with February and December being the months of greatest supply.
*American Indians used the purple lining from clamshells to make wampum (beads strung in strands, belts, or sashes and used for barter, ornamental, ceremonial and spiritual purposes).

Selection and Care: Clams are sold live in the shell, fresh or frozen shucked, and canned. All raw shellfish must be stored in refrigeration to slow or minimize bacterial growth. People with liver disorders or weakened immune systems should not eat clams or other seafood unless it has been thoroughly cooked. Direct storage in ice is not recommended as it may kill the shellfish. Store live clams up to 2 weeks in a 40 Degrees F refrigerator in containers with the lid slightly open. Refrigerate shucked clams up to 7 days in a sealed container. Clams can be frozen in the shell and kept up to 3 months. Frozen shellfish should be thawed in the refrigerator.

Culinary: Clams are high in protein and virtually fat free and are perhaps the most versatile seafood in the world. Clams may be prepared in a variety of ways including steaming, frying and baking. They are a favorite in chowders, soups, appetizers and casseroles.