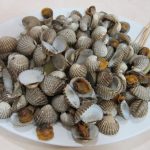 Identification & Biology: cockle is the common name for bivalve mollusks of the family Cardiidae. The shells are a common fixture on many beaches throughout the world. The distinct rounded shells are symmetrical, heart-shaped and feature strongly pronounced ribs.

The mantle has three apertures (inhalant, exhalant, and pedal) for siphoning water and for the foot to protrude. Cockles typically burrow using the foot and feed by siphoning water in and out, sifting plankton from it. They are also capable of ‘jumping’ by bending and straightening the foot. Unlike most bivalves, cockles are hermaphroditic and reproduce quickly.

Range & Habitat: Several species of cockles are considered to be good, edible clams. In the British Isles, great numbers of cockles are taken annually for food from densely populated beds. These beds have been known to migrate in units, probably in response to changes in currents. Protothaca staminea, the rock cockle, is among the best known and most widely used for food. It usually does not exceed 3 in. (7.5 cm) in length. Rock cockles are poor diggers and inhabit packed mud, or gravel mixed with sand, usually 8 in. (20 cm) below the surface. They are found on the Pacific Coast near the rocky shores of bays and estuaries.

Market Description: Cockles are a popular type of shellfish in both Eastern and Western cooking. Cockles are sold fresh as a snack food in the United Kingdom, and are eaten with vinegar. Seafood stalls sell them along with mussels, whelks, and eels. They are also available pickled in jars and, more recently, they are sold in convenient sealed packets (with vinegar) containing a plastic two-pronged fork.

Boiled cockles are sold at many hawker centers in Singapore, and are used in laksa, char kway teow and steamboat (food).