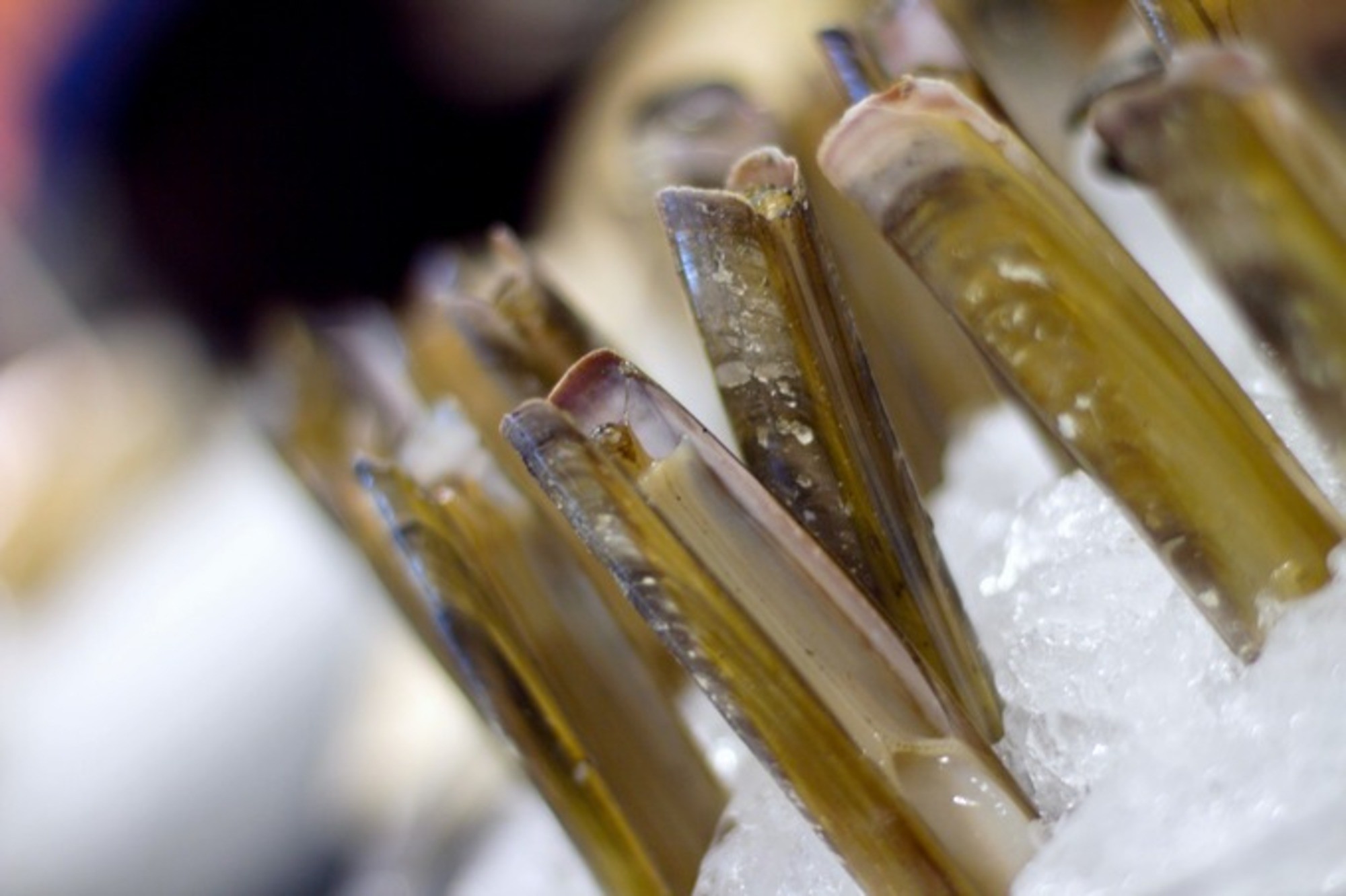 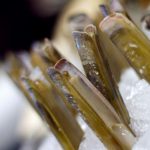 The Razor Clam (Siliqua patula) is an important bivalve mollusk harvested extensively throughout its range by commercial and sport fisheries. Its scientific name is derived from the Latin: siliqua means pod, and patula means open; thus, “resembling an open pod.”

Identification & Biology: The long, narrow shell of S. patula may attain a length greater than 7 inches. In very young specimens, the periostracum, or outermost tissue-like layer of the shell, is brown. It gradually becomes yellowish-brown in medium-sized animals and changes again to brown with age.

Range & Habitat: The Pacific Razor Clam (Siliqua patula) is an exceptionally meaty shellfish, which ranges from California to Alaska. It is abundant on surf-pounded ocean beaches, but also occurs in sheltered areas along the coast. Limited diving observations have indicated some adult razor clams (S.patula) offshore for up to one-half mile. Razor clams are found primarily on the intertidal coastal beaches (those that are exposed at low tide) from a +3 foot level to a -2 foot tide level.

Razor clams feed primarily on one type of plankton, a diatom called Attheya armatus, which they filter from seawater.

Shellfish Toxicity: Some people are naturally allergic to shellfish, or illness may result because of polluted habitat or storage of clams at too high a temperature. Another source of illness is paralytic shellfish poisoning (PSP) which is caused by the razor clams’ ingestion of a one-celled organism that may pass over the clam growing area.

Market Description: Razor clams are some of the best eating clams in the Pacific Northwest and perhaps the world.

Buying Tips: Live clams and cockles should be held at 34-38°F in a moist environment. Don’t use ice, as fresh water will shorten shelf life. Under ideal conditions, clams will stay alive for 10-14 days, although shelf life is shorter in summer after animals have spawned.

Recommended Preparation: Razor clams must be cleaned before cooking. Cleaning is a fairly simple process and you end up with using almost the entire clam ready to cook. (Pre-cleaning tip: Soon after you dig your razor clams; put them in cool fresh water. This will allow them to pump most of the sand out of their systems.)

Chop and chowder them if you must, but razor clam connoisseurs consider this a woeful waste. A better way is to flour and then fry them quickly in hot butter or vegetable oil — not much more than two minutes on each side or they get rubbery tough.