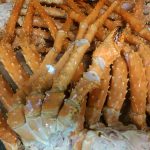 Red king crabs, Paralithodes camtschaticus, have been the commercial “king” of Alaska’s crabs. It occurs from British Columbia to Japan with Bristol Bay and the Kodiak Archipelago being the centers of its abundance in Alaska.

Blue king crabs, P. platypus, live from Southeastern Alaska to Japan with the Pribilof and St. Matthew Islands being their highest abundance areas in Alaska.

Identification & Biology: The skeleton of the king crab is its calcium-rich shell. In order for it to grow, it must molt – shedding the older shell. Young crabs must do this many times in a given year – less often after they mature. King crabs have fan-like abdomens that look like tails, tucked under the back of their shells.

They have five pairs of legs: the first pair called the pincers – the right one being the largest. The next three legs are used primarily for strutting around the sea floor, getting from one destination to another. The fifth pair of legs tuck underneath the back of their carapace – the shell covering their back, and are used for mating and reproductive activities.

Commercial Fisheries: King crabs are most commonly fished using pots. Commonly, each pot is baited, with chopped herring, and then dropped to the water where it sinks to the bottom and is generally allowed to soak for one or two days when fishing red or blue kings, but longer when fishing for golden king crabs. Buoys attached to the pots with heavy line are retrieved and lifted onto the boat by use of powerful hydraulic systems. King crab fishing can be very dangerous due to the heavy pots, coils of line, long hours, and rough seas which at times can exceed 20 feet! Only male crabs can be legally sold.

Market Description: Commercially, king crabs are delivered live, and then cleaned; leaving two sets of legs, each termed a section. Sections are cooked in boiling water then dipped in cold water, both baths slightly brined. Sections are then frozen and shipped primarily to U.S. and Japanese restaurants.

Recommended Preparation: Private individuals clean the crabs, then boil or steam the legs in either salted or unsalted water for 20–30 minutes. The meat is eaten hot or cold, plain or with melted butter, or with garlic or seafood sauce. King crab is also delicious in salads, sandwiches, and a variety of other dishes.