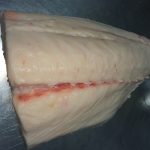 mackerel, smoothskin oilfish, and butterfish… the only species in the genus Lepidocybium.

Identification & Biology: The escolar is dark brown in color, growing darker with age until it is quite black. It is a fast-swimming fish with a prominent lateral keel and multiple finlets. It grows up to 2 m in length, weighing between 30 and 50 kg.

Range & Habitat: It is found in deep (200–885 m) tropical and temperate waters around the world. It is a frequent catch in the coastal waters of Australia and New Zealand.

Market Description: Like its relative the oilfish, the escolar is consumed in several European and Asian countries, as well as in the USA. Neither fish metabolises the wax esters naturally found in their diet, which causes an oil content in the muscle meat of the fish amounting to 18–21%.

*To minimize the risk of gastrointestinal symptoms, called “keriorrhoea”, strict control of portion size is recommended. Portions should be no greater than 6 ounces.

Escolar has been banned from consumption in Japan since 1977, as the Japanese government considers it toxic. In the United States, the U.S. Food and Drug Administration, after receiving complaints about diarrhea associated with escolar consumption, issued a bulletin recommending against import of the fish in the early 1990s. However, the FDA backed away from this recommendation and withdrew the bulletin several years later after deciding the fish was nontoxic.

Buying Tips: Escolar is sometimes sold misleadingly as “white tuna”, “butterfish”, “oilfish” and “Hawaiian butter fish”; in Hawaii and Fiji, it is known as walu.

Recommended Preparation: Escolar has a very white flesh and is sometimes consumed raw as sushi or sashimi. Filleted and cut into thick steaks, escolar can be cooked in numerous ways: pan-fried, braised or grilled. The flavor of its moist white flesh is a bit like that of halibut. It lends itself well to both traditional and exotic recipes. Grilling will tend to reduce the heavy fat content whereas battering will not.