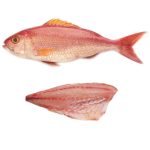 Identification & Biology: its skin is light brown. Opakapaka are usually caught at depths between 30 and 100 fathoms. Fish caught over hard bottoms have brighter skin colors than those caught over soft bottoms. Although this species occurs throughout the tropical Pacific, nowhere does it grow as large as in the Hawaiian Islands. When a new opakapaka fishing area is discovered, the initial size of fish caught may be 12 to 18 pounds. Opakapaka of this size could be at least 10 years old.

Market Description: Opakapaka is sold at the fish auctions, through intermediary buyers on the major islands, and directly to retail fish markets and restaurants. Opakapaka is caught principally by vertical hook-and-line gear. Small fish, which migrate into relatively shallow depths, are sometimes trapped.The Northwestern Hawaiian Islands’ catch is marketed primarily through the Honolulu fish auction.

Shelf Life & Quality Control: Opakapaka caught off the main Hawaiian Islands are marketed within a few days, whereas the fish taken in the Northwestern Hawaiian Islands in some cases may not reach the market for 10 days. When properly cared for, opakapaka has a long shelf life — almost two weeks after capture.

Color, Taste, Texture: Opakapaka has a clear, light pink flesh that is firm in texture. Its delicate flavor has gained the opakapaka a reputation as Hawaii’s premium table snapper. Fish caught during the winter months seem to have a higher fat content than those caught in the summer, and opakapaka yields the best sashimi during the winter season.

Recommended Preparation: Opakapaka fillets are well suited for an array of preparations, including baking, poaching and sautéing. The smaller-sized fish harvested off the main Hawaiian Islands are directed toward the ethnic restaurant and household retail markets in Hawaii, where opakapaka is often prepared by steaming or baking fish with the head on. In these markets, opakapaka is also used to make sashimi and fish head soup.