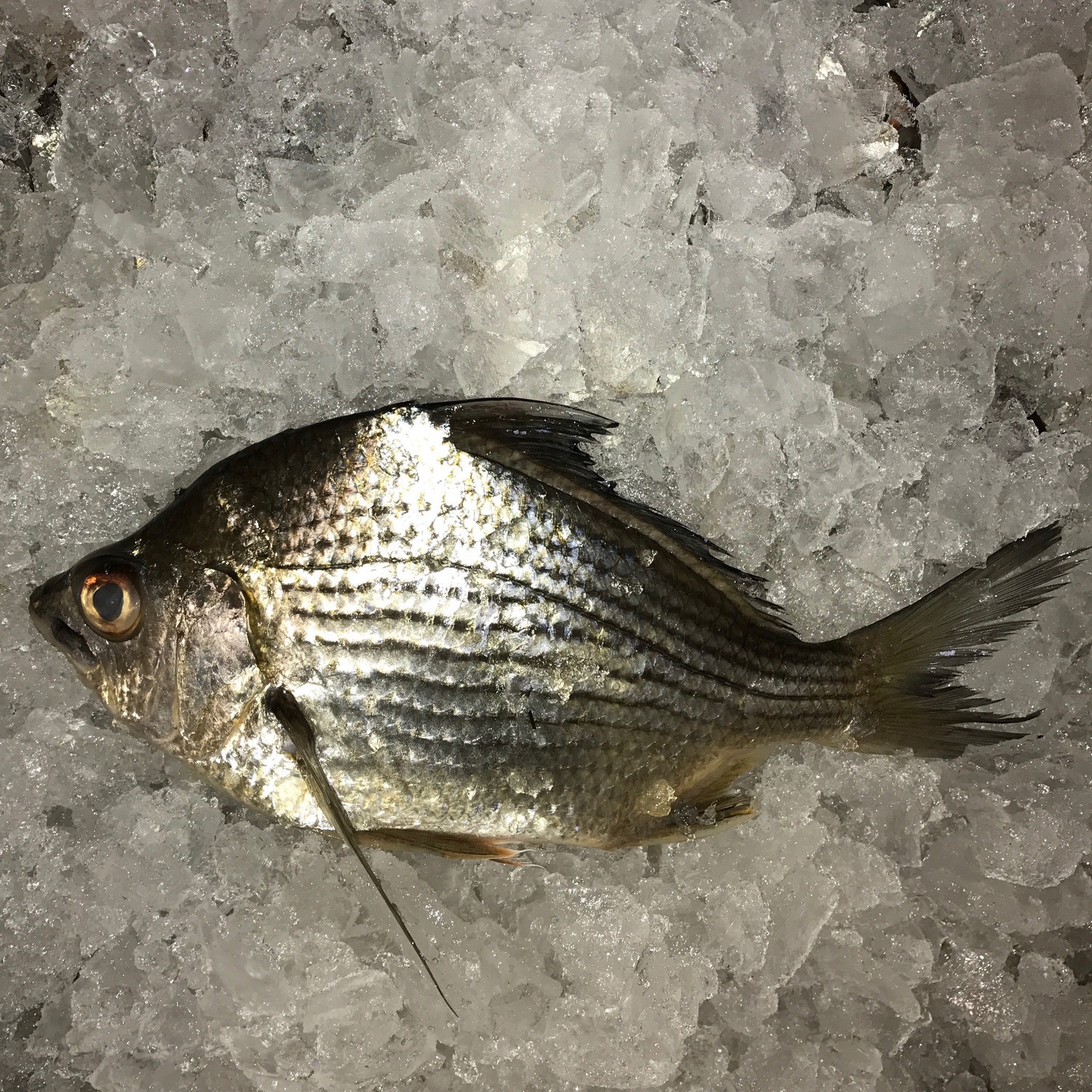 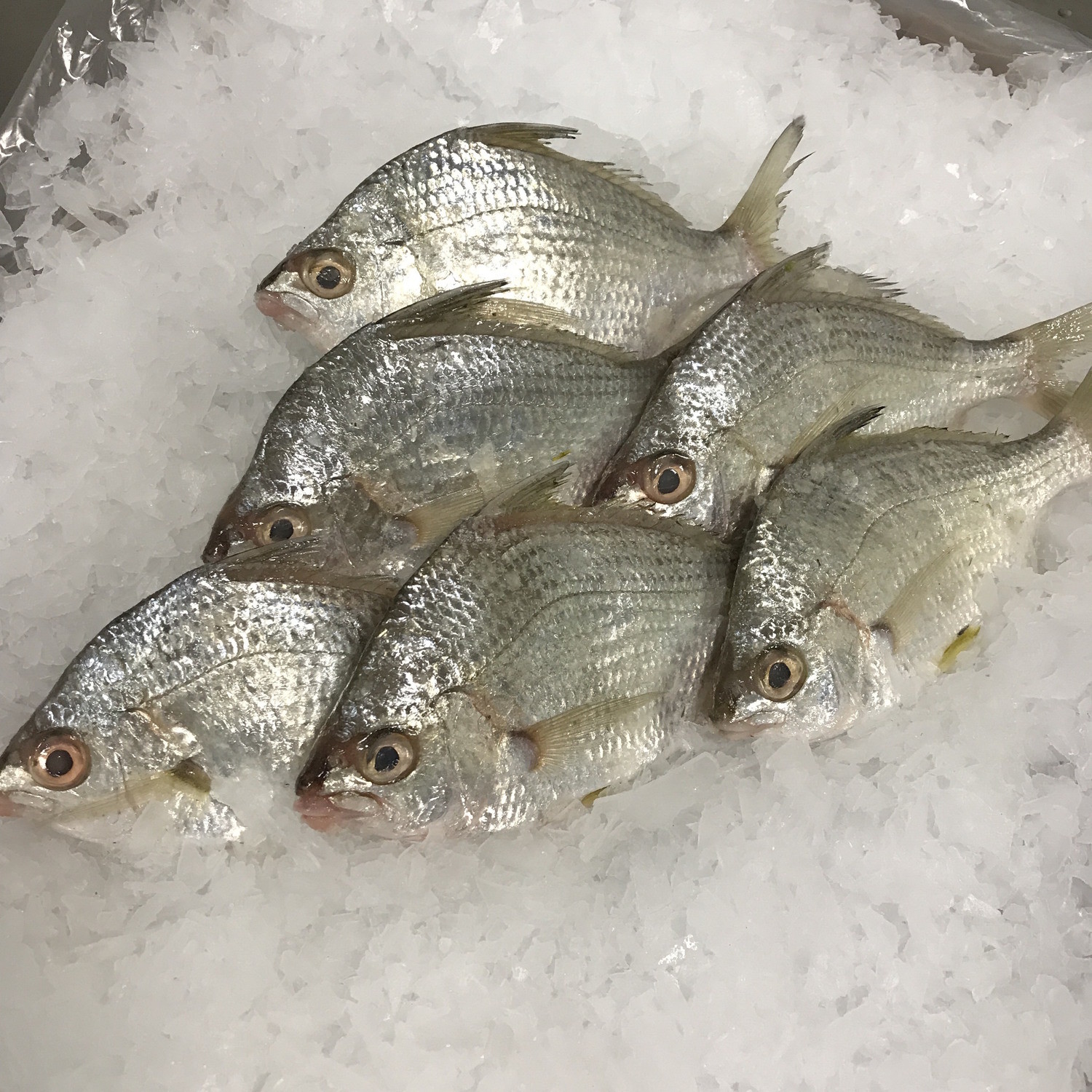 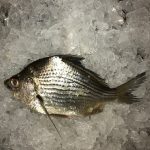 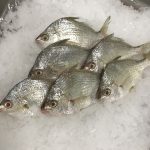 dentification & Biology: Sea bream are part of the marine sparid fishes. The Sparidae family is also known as porgies. These fish have certain distinctive features that make them easily identifiable. Their bodies are relatively flat. The line from the dorsal area to the front of the fish descends very rapidly giving the face a flattened appearance, especially when viewed in profile. Color varies widely from species to species, mainly depending on water type and environment. In brackish waters, for example, sea bream tend to be darker, with shades of blacks and grays to help the fish blend in with its environment. Some fish, in other areas, even have a bright red appearance, showing how diverse members of the family can be. The front teeth of many sea bream are broad and flat, ideally suited for crushing small crabs and clams.

Perhaps the most common variety of fish referred to as sea bream is the European sea bream, (Pagellus centrodontus). This fish is mainly silver in color, but with shades of both red and yellow, depending on the individual. It is commonly found in oceans surrounding Europe and is considered to be a temperate-water fish, preferring water that is cool, but not extremely cold.

Range & Habitat: Sea bream are found in oceans all over the world and in all types of water temperatures, depending on the species. Due to their wide distribution, they are well known as a food fish in many cultures. Varieties include Black, Black Banded, Red, Pink, White, Yellowfin, Theadfin, Gilthead and Ray’s Bream, along with Pagre, Porgy and Dentex… not to be confused with freshwater Bream.

There are a number of sea bream that are also commonly found in the western Atlantic, off the coasts of the United States and in the Caribbean. These include the western Atlantic sea bream (archosargus rhomboidalis), and the fish commonly known as the sheepshead. Both prefer subtropical waters and are usually found in areas that offer plenty of cover, such as reefs and under bridge pilings.

Market Description: Sizes range from 300g (10.58oz) to 1kg (2.2 lbs), and tend to average around 450g (1 lb)… making sea bream a great fish for serving whole. The sea bream are sought after because of their mild, white meat, considered as some of the best of any white-meat fish. The larger 800g+ fish provide good size fillets and can be grilled, baked, steamed, poached or pan-fried… and is at its best with lighter, subtler Mediterranean flavors. The most popular and highly regarded of the sea bream is the Gilthead Bream (also known as Royal Bream). According to Greek mythology, Gilthead Bream was considered sacred to Aphrodite – the goddess of love, beauty and sexual rapture! A superb looking fish with bright silvery skin and hints of pink and gold, Giltheads are successfully farmed in the Mediterranean, giving year-round availability.

Recommended Preparation: With its pinkish opaque flesh, the popularity of sea bream continues to grow as a slightly sweeter tasting alternative to sea bass, and can be cooked the same way as bass and other bream.