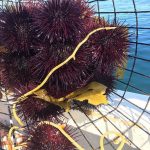 Identification & Biology: Sea urchins are members of a large group of marine invertebrates in the phylum Echinodermata (spiny skinned animals) that also include starfish, sea cucumbers, sea lilies, and brittle stars. All sea urchins have a hard calcareous shell called a test, which is covered with a thin epithelium and is usually armed with spines. The spines are used for locomotion, protection, and for trapping drifting algae for food. Between the spines, are tube feet that are used in food capture, locomotion, and for holding on to the substrate. Sea urchins also have small pinchers, called pedicellarine, that are used for defense and for clutching food. The mouth is located on the underside called the “Aristotle’s lantern.”

Market Description: The major commercially valuable sea urchin species in the U.S. are the red (Strongylocentrous franciscanus), the purple (S. purpuratus), and the green (S. droebachiensis) sea urchins. Several other species also occur, but are either too small or too rare to be of economic significance.

The red sea urchin is one of the largest species of sea urchins in the world, growing to a test diameter of about 7 inches. The red sea urchin occurs on the west coast of North America from the tip of Baja California to Sitka and Kodiak, Alaska. The purple sea urchin is the common intertidal sea urchin of exposed and semi-protected rocky areas on the west coast of North America from Baja, California, to Sitka, Alaska. The green sea urchin has a circumpolar range. In the eastern Pacific, it is found as far north as Point Barrow, Alaska, and southward to Washington. It occurs in the Aleutian Islands and westward to Kamchatka, Korea, and Hokkaido, Japan. In the north Atlantic, it is found on the East Coast of the U.S. and Canada, and in Greenland, Iceland, and northern Europe.

Buying Tips: A fresh sea urchin has firm spines and a tightly closed orifice. Place the sea urchins in a container covered with a damp cloth. Do not immerse them in water or place them in an airtight container, which would prevent them from breathing. They should be kept at a temperature between 0 and 4° C (32-40° F). In their shells they will keep for 3 days; shelled for 1 or 2 days.

Recommended Preparation: Sea urchin has the briny flavor of the sea. Raw, sea urchin can be garnished with lemon juice, shallot and salt. Try it as ceviche (simply marinated with a drizzle of oil and yuzu [Japanese lemon juice]) or cooked for a few minutes in its shell by steaming it like an egg. The liquid is excellent. Measure it, add gelatin according to its volume, and pour into the emptied shells to which you’ve returned the edible parts. Place in the refrigerator to set. The liquid should be gelatinous but not firm. The sea urchin can also be made into a sauce or purée, used to flavor sauces or scrambled eggs. It’s the main ingredient in “oursinade,” a Provençal sauce that accompanies poached fish.