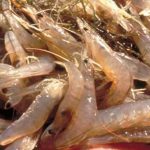 Market Description: There are three species of gulf shrimp that have worldwide commercial importance, pink, gulf white, and brown. Brown shrimp constitute nearly half of the United States shrimp harvests. Gulf shrimp, unlike other varieties of shrimp, do not survive well in captivity and thus are not cultured. The only sources or gulf shrimp are wild. Over 100 million pounds are harvested annually.

Notes: Gulf shrimp deteriorate rapidly. Black spots, called melanosis, on the shrimp indicate that the shrimp has started to spoil. If the shrimp is yellow or has a bleached appearance excessive amounts of bisulfate have probably been used on it.

Recommended Preparation: Gulf shrimp has a mild, sweet flavor that makes it perfect for a wide variety of dishes: as an appetizer, Creole-style, broiled with butter and garlic, in salads or scampi.