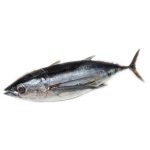 The albacore, (Thunnus alalunga), is a type of tuna in the family Scombridae. The Japanese name is tombo. This species is also called albacore fish, albacore tuna, albicore, longfin, albies, pigfish, tombo ahi, binnaga, Pacific albacore, German bonito, longfin tuna, longfin tunny, or even just tuna. It is the only tuna species which may be marketed as "white meat tuna" in the United States.

Range & Habitat: It is found in the open waters of all tropical and temperate oceans, and the Mediterranean Sea. Albacore, used for canned white tuna, is a popular, widespread commercial fish. Among the fastest fish in the sea, tunas migrate thousands of miles in mixed schools. Albacore grow to a maximum 5 feet, (1.5 meters).

Identification & Biology: The pectoral fins of the albacore are very long, as much as 50% of the total length. The dorsal spines are 8 to 10 in number, and well forward of the rays of the dorsal fin. The anterior spines are much longer, giving a concave outline to the spiny part of the dorsal fin.

Market Description: Albacore is the lightest-fleshed tuna, with white to pink flesh and a mild flavor.
The main sources of albacore tuna are Japan and Taiwan, followed by Spain and the United States. Albacore tuna sold in the U.S. market are primarily from Taiwan. Canned tuna, however, comes mainly from Thailand, Indonesia and Ecuador.
Albacore is a prized food, and the albacore fishery is economically significant. Methods of fishing include pole and line, long-line fishing, trolling, and some purse seining. It is also sought after by sport fishers.

Sold as: Albacore tuna is sold fresh or frozen, in steaks and fillets, and canned in oil or water

Buying Tips: Buy fresh, chilled albacore that is no more than a few days old at the time of sale. The very best will be well iced or refrigerated, and have a very mild odor compared to that of other tuna species. For the frozen variety, look for an outer appearance that is dent free. Once thawed, the fish should have a fresh, salty smell that is not overbearingly fishy. Firm to a little soft are ideal textures.

Note: Albacore has a tendency to dry out. Whichever cooking method you chose, it is important not to overcook the fish!

Remarks: Although abundant in certain chemicals like heart-healthy Omega 3, due to the higher-than-normal concentrations of certain metals and contaminants in albacore tuna than many other fish, the FDA has released numbers to consider when consuming this fish: